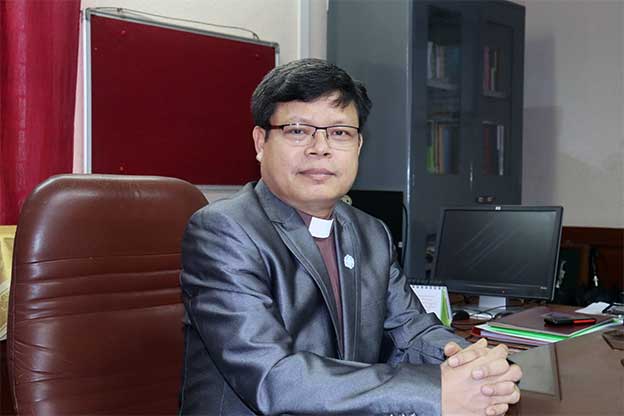 Covid-19 Pandemic has shaken the entire world unlike ever before impacting every realm of human life across faith communities, caste/class, and colour in an unprecedented proportion. We have witnessed the entire world at the brutal face of an unexpected death due to unthinkable and unimaginable COVID-19 pandemic. There is utter disruption of social, economic, political and religious life altogether. Not only the entire socio-economic life disrupted, but also the whole religious faith, rites and rituals are torched into tosh. Even it appears true that power of prayer, healing, miracle have disappeared. Indeed, the Covid-19Pandemic certainly has turned the human civilisation upside down once again. It has forced human beings realise their limitation. We also have witnessed the creation of God dangerously asphyxiated. The creation is threatened to death as human beings are. This rancorous virus is still scrupulously waiting at the door to enter into the lungs to kill the rest of the creation, which demands to bring the creation back to life.

Considering such predicament of human existence and its insinuation to creation, Gurukul has taken up yet another bold theological vision to reflect on the theme – “RESUSCITATE THE CREATION” throughout the academic year 2021-2022.

The term “Resuscitate”is a verb that demands “action” or “to act.” This action transcends the customary borders of task into the indescribable and inconceivable risky borders. As per the New Oxford Learner’s Dictionary the meaning of the term is bringing back to life even at the stage of stopped breathing. Resuscitation, the noun form, is described as a mouth-to-mouth action. It is an action from the drastic face of death to the abundance of life. It is an action to bring back to the state of consciousness from the hopeless state of unconsciousness. It is an act to make something vitally dynamic again. “Resuscitate the Creation”indubitably declares that no context is hopeless since each context is embedded with tremendous possibilities of life. That is the magnanimity of God’s creation. Further, the contemporary context of ecological crisis, environmental issues, and climate change demand for resuscitating the creation as an urgent need of the hour.

The scriptural foundation for the theme is that the Bible is all about the creation of God and God’s task of resuscitating it continuously. The Bible begins with creation of the cosmos as God’s primary task, and ends with the reality of God to dwell with the creation to resuscitate. The first revelation of God before the creation is through creating the world. The God of the Bible struggles restlessly and painfully to save the creation into the fullness of life from the destructive forces of death. In the process of resuscitating the creation the Bible reveals a God who fights against the evil structures uncompromisingly. In fact, this is evident from the liberative values revealed in the life and work of Jesus, the Christ.

From the viewpoint of Hermeneutical Horizon, the life of God is for creation. For without creation God cannot reveal God’s being. And there is no revelation of God without creation. Creation is the ultimate medium for the revelation of God. Therefore, existence of creation is the main task of God. There is no possibility with creation to exist without resuscitation. Perhaps, God is tirelessly at work to resuscitate the creation. So, the creation is an ongoing process and it is in the process of evolution towards perfection. In fact, the very existence of God can be realized through the resuscitation of creation.

Epistemologically, “Resuscitate the creation” does not allow to have occhiolistic position. In the process of “resuscitating the creation,”human being should be aware about the smallness of perspective or understandings he/she can possess about the existential veracities of God’s creation in which human being cannot possibly draw any absolute conclusion. Though we know Covid-19 is a destructive reality we are not sure about the vision, plan and work of God behind it. Therefore, we are supposed to be positive and open towards this pandemic by realizing that this dreadful situation can also be a ground to“resuscitate the creation” as a plan of God.